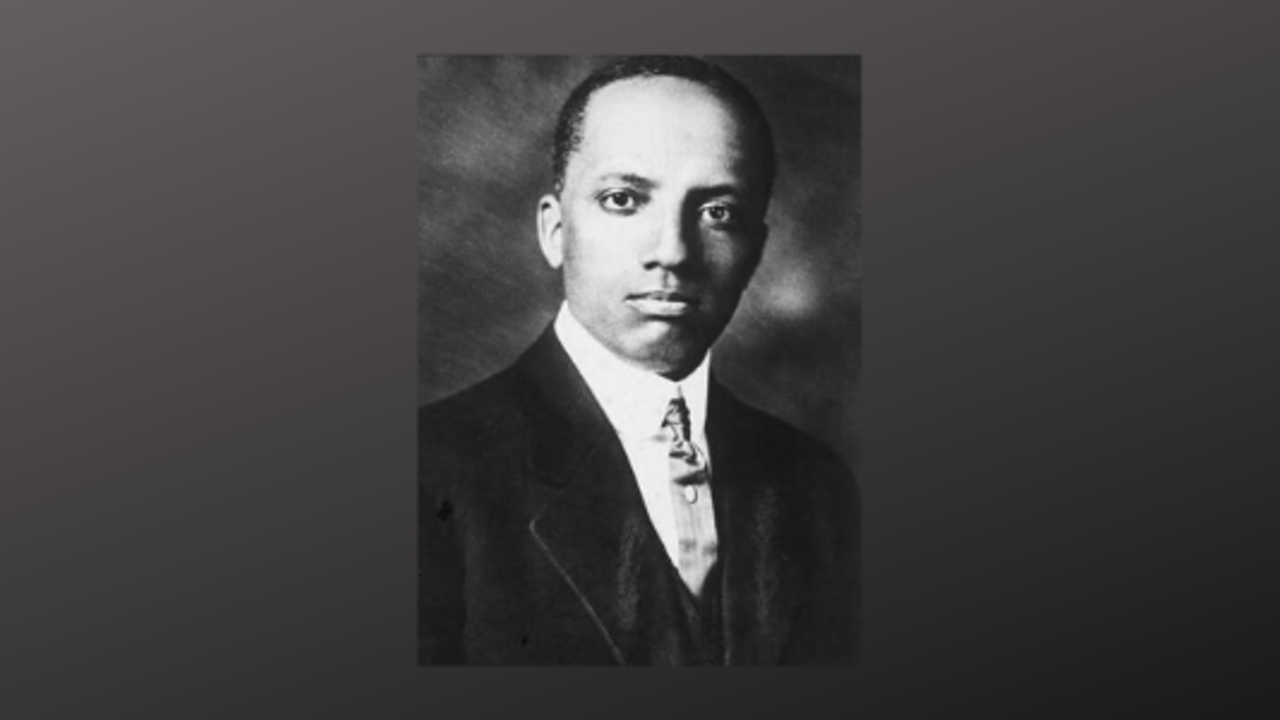 Carter Godwin Woodson, was an African American historian, author, publisher, and the father of Black History Month which began as Negro History Week in February 1926. He was also the second African-American ever to receive a doctorate from Harvard University. In 1895 William Edward Burghardt Du Bois was the first.

Prior to his scholarly work, the field of Black history had been largely neglected or distorted in the hands of historians who accepted the traditionally biased picture of Blacks in American and world affairs. In 1916 Woodson edited the first issue of the association’s principal scholarly publication, The Journal of Negro History, which, under his direction, remained an important historical periodical for more than 30 years.

He believed that Blacks should know their past in order to participate intelligently in the affairs in our country. He strongly believed that Black history – which others have tried so diligently to erase – is a firm foundation for young Black Americans to build on in order to become productive citizens of our society. 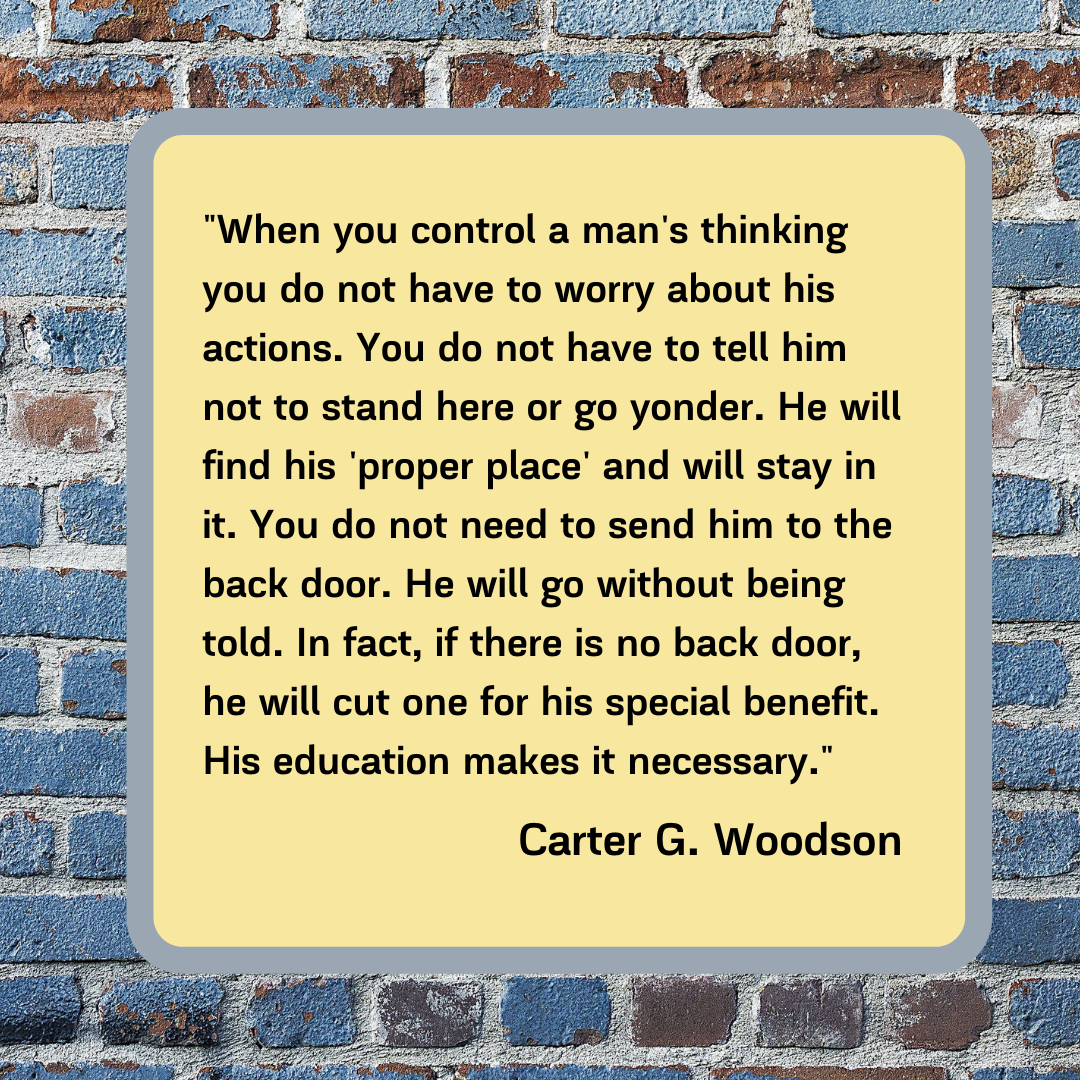 Carter G. Woodson was born in New Canton, Buckingham County, Virginia on Dec. 19, 1875 to former slaves Anne Eliza Riddle and James Henry Woodson, a carpenter.  Although his parents could neither read nor write, Woodson credits his father for influencing the course of his life. His father, he later wrote, insisted that “learning to accept insult, to compromise on principle, to mislead your fellow man, or to betray your people, is to lose your soul.”

Helping on the farm prevented him from attending school for most of its five-month term. He didn’t let that deter him from teaching himself to master the fundamentals of common school subjects by age seventeen.

Eager to get more education, he and his brother Robert Henry moved to Huntington, West Viriginia where he hoped to attend Douglass High. Once there, however, he was forced to delay his education so he could  earn his living as miner in Fayette County coal fields. Eventually, he entered and completed Douglass High School by 20 years old.

From 1897 to 1900, Carter G. Woodson began teaching in Winona, Fayette County. In 1900, he returned to Huntington to become the principal of Douglass High School. He received his Bachelor of Literature degree from Berea College, Kentucky. From 1903 to 1907, he was a school supervisor in the Philippines. Later he traveled throughout Europe and Asia and studied at the Sorbonne University in Paris. In 1908, he received his M.A. from the University of Chicago, and in 1912, he received his Ph.D. in history from Harvard University.

The origin of Black History Month

Together they organized a Negro History Week, beginning in February 1926. They selected the month of February for this celebration because it was close to the birthdays of Pres. Abraham Lincoln, who had been responsible for the Emancipation Proclamation, and the African American orator and abolitionist Frederick Douglass. 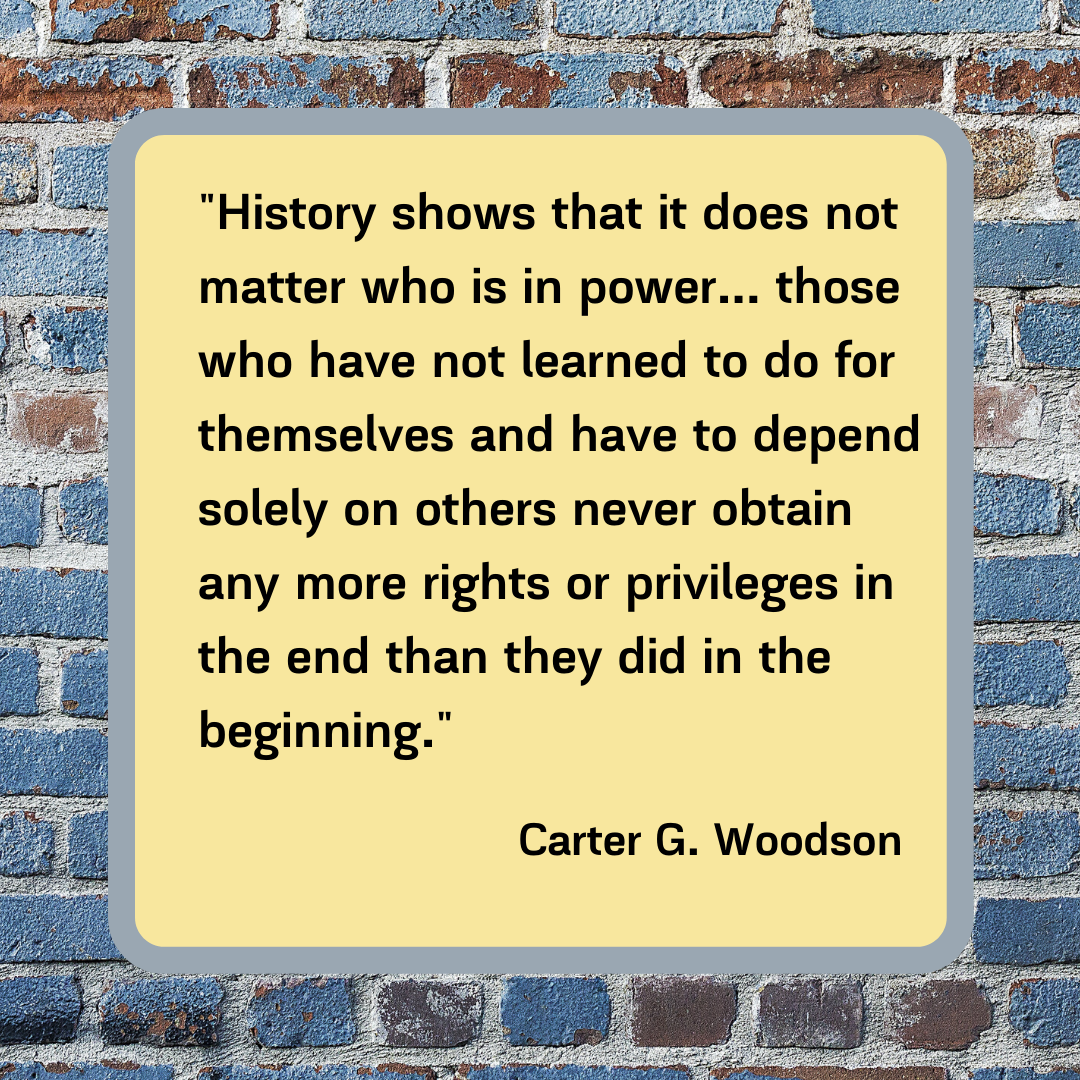 The need for learning Black history

Woodson believed strongly that Blacks must learn their own history, and not count on other races to teach us the real story of our ancestors and cultural experiences. He also believed that the integral role Blacks played in the history of America should be taught to all Americans, not just Blacks.

If a race has no history, if it has no worthwhile tradition, it becomes a negligible factor in the thought of the world, and it stands in danger of being exterminated. ~Carter G. Woodson

When word got out that Julia Roberts had been suggested for the role of Harriet in the 2019 movie,  I thought it was a joke. So I googled it and found this in Variety

Cynthia Erivo has received widespread acclaim for her portrayal of Harriet Tubman in Kasi Lemmons’ biopic “Harriet.” But according to the movie’s screenwriter Gregory Allen Howard, Julia Roberts — yes, that Julia Roberts — was once suggested by a studio executive to play the role.

In a Q&A for “Harriet” studio Focus Features as well as a piece for the L.A Times, Howard explained he had been working on the script for a Harriet Tubman biopic as far back as 25 years ago, but that “the climate in Hollywood…was very different back then.”

According to Howard, a “then-president of a studio sublabel” praised the script and then suggested Roberts play Tubman. “Fortunately, there was a single Black person in that studio meeting 25 years ago who told him that Harriet Tubman was a Black woman,” Howard wrote in the Times piece. “The president replied, ‘That was so long ago. No one will know that.'”
https://variety.com/2019/film/news/julia-roberts-harriet-tubman-1203410130/

Woodson publishes The Mis-Education of the Negro in 1933

The thesis of Dr. Woodson's most popular book is that Blacks of his day were being culturally indoctrinated, rather than taught, in American schools. This conditioning, he claims, causes Blacks to become dependent and to seek out inferior places in the greater society of which they are a part. He challenges his readers to learn to "do for themselves", regardless of what they were taught.

Enjoy this free audio version of Dr. Woodson's seminal work: The Mis-Education of the Negro, written in 1933, and in some respects eerily relevant today.

Dr. Carter G. Woodson holds an outstanding position in early 20th century American history. He was one of the first to study Black history and encouraged other scholars to do the same. He authored numerous scholarly books and articles on the positive contributions of Blacks to the development of America. He never married nor had children and died in 1950.

Black history shouldn't be singled out from American history

Every year during Black History Month the objectors say focusing attention on one race for a full month contributes to separation and is detrimental. They think it should be part of a single study of American history (except for those who think it should be ignored and erased.)

Woodson would agree. American history is a tapestry of contributions and achievements of the many enslaved and immigrants who helped build and defend this country. To throw a one month crumb of recognition to a group that has routinely been marginalized throughout the study of American history is unconscionable. His goal was to shine a light on and give voice to the labor, inventiveness, and courage that helped build America literally and figuratively.

His message was that Blacks should be proud of their heritage and that other Americans should also be aware of and understand it.

Woodson’s hope was that one day Black history wouldn’t have to be singled out to be celebrated separately, but rather the accomplishments and contributions of Blacks would be an integral and legitimate part of the study of American history throughout the year.