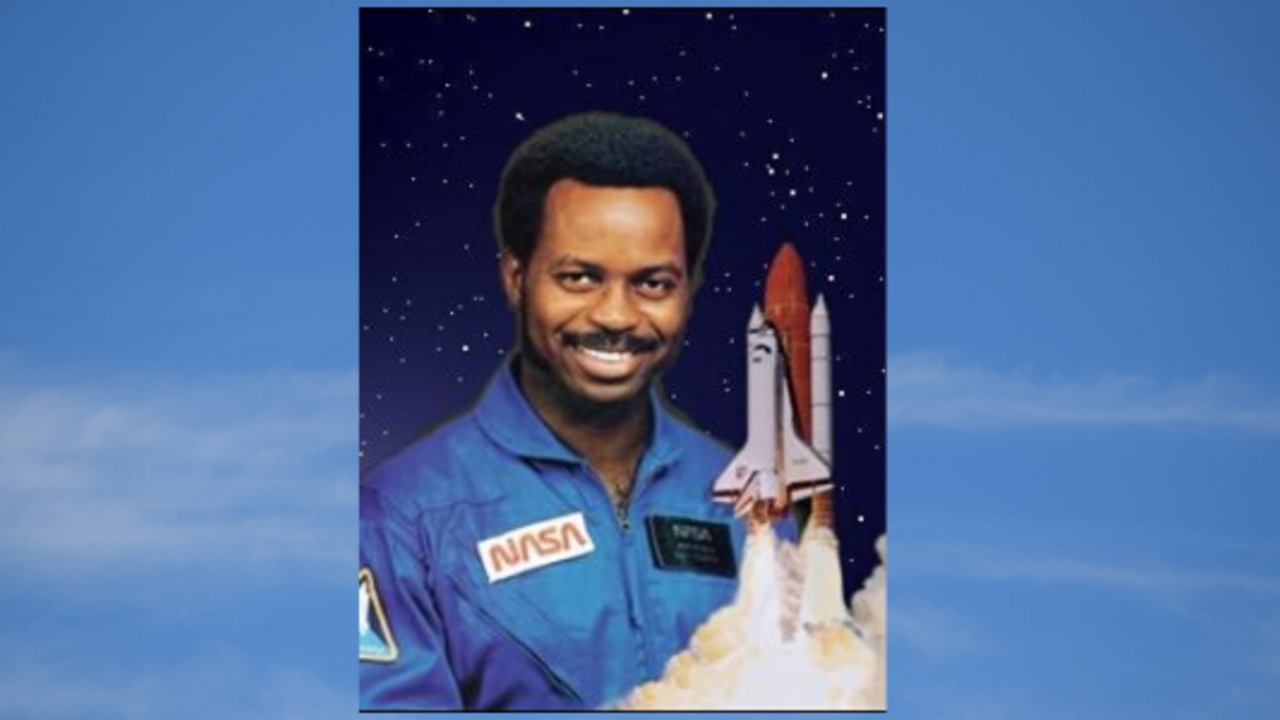 Ronald Erwin McNair was a physicist and NASA astronaut.  He was the second African American astronaut in space with the launch of the STS-41B mission of the Space Shuttle Challenger on February 3, 1984.  On January 28, 1986, during his second space flight, he was one of the seven crew members killed when the Challenger exploded 73 seconds after liftoff.

Ronald Erwin McNair was born on October 21, 1950, in  Lake City, South Carolina, the second of three boys born to Carl, a mechanic, and Pearl, a teacher. McNair was a child prodigy who began reading at age 3 and whose early aptitude for technical matters earned him the nickname "Gizmo."

Early on he dreamed of becoming a scientist, even though it was a time of racial segregation when opportunities for the advancement of blacks were often thwarted.

His self-determination and motivation were evident at an early age when in the summer of 1959, he bravely entered a whites-only public library and insisted on being allowed to check out his books.

In the following clip his brother, Carl McNair, tells what happens next.

McNair's interest in space was aroused by the launch of the Russian satellite Sputnik in 1957. Then years later the appearance of Star Trek on TV with its multi-ethnic cast confirmed in his mind what was possible for him.

Two books about his life have published.

This is a children's book that recounts his experience in the library. [My Amazon Affiliate link is embedded in this book cover. If you buy through that link you won't pay a penny more, but I will receive a small commission. Thank you.] 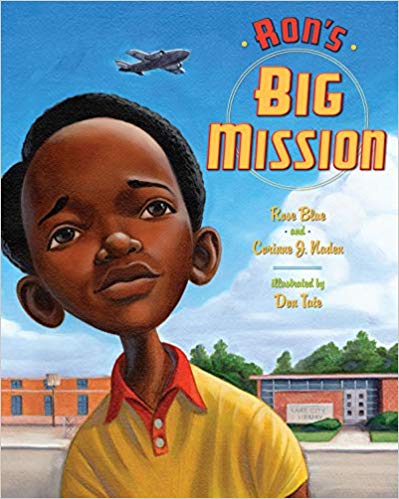 The second book is his biography written by his brother, Carl McNair. [My Amazon Affiliate link is embedded in this book cover. If you buy through that link you won't pay a penny more, but I will receive a small commission. Thank you.] 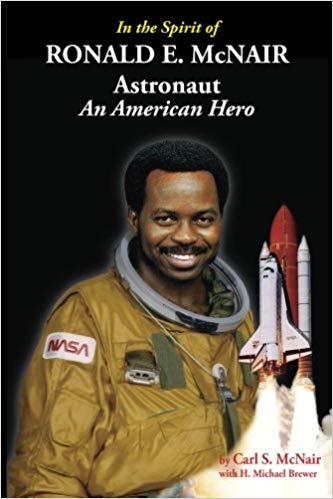 After graduating valedictorian of his high school class, Ron was accepted by North Carolina A&T University where he graduated with a B.S. degree in physics in 1971. Continuing his education, he ultimately received his Ph.D. in quantum electronics and laser technology in 1976 at the Massachusetts Institute of Technology (MIT) in Cambridge, Massachusetts.

Following the death of her husband, Cheryl joined other surviving family members of the crew to form the Challenger Center for Space Science Education, serving as its founding director.

After graduating from MIT, McNair became a physicist with the Hughes Research Laboratories in Malibu, California. It was his work here that got him closer to his dream of becoming an astronaut.

When he learned that NASA was looking for astronauts, he applied.  Of the 11,000 applicants, McNair was one of 35 selected in January 1978, and he completed his training and evaluation period the following August.

About five months after Guion S. Bluford became the first African American in space, McNair became the second with the launch of the STS-41B mission of the Space Shuttle Challenger on February 3, 1984.

McNair was the recipient of many academic honors.

He was also a member of several organizations during his professional career, including the American Association for the Advancement of Science, the American Physical Society and the North Carolina School of Science and Mathematics Board of Trustees.

Among his many honors, he was named a Distinguished National Scientist by the National Society of Black Professional Engineers in 1979 and received the Friend of Freedom Award 1981. He also garnered honorary doctorates from NC A&T State University, Morris College and the University of South Carolina.

In 2004, McNair and the rest of his Challenger crew members were posthumously honored with the Congressional Space Medal of Honor by President George W. Bush. 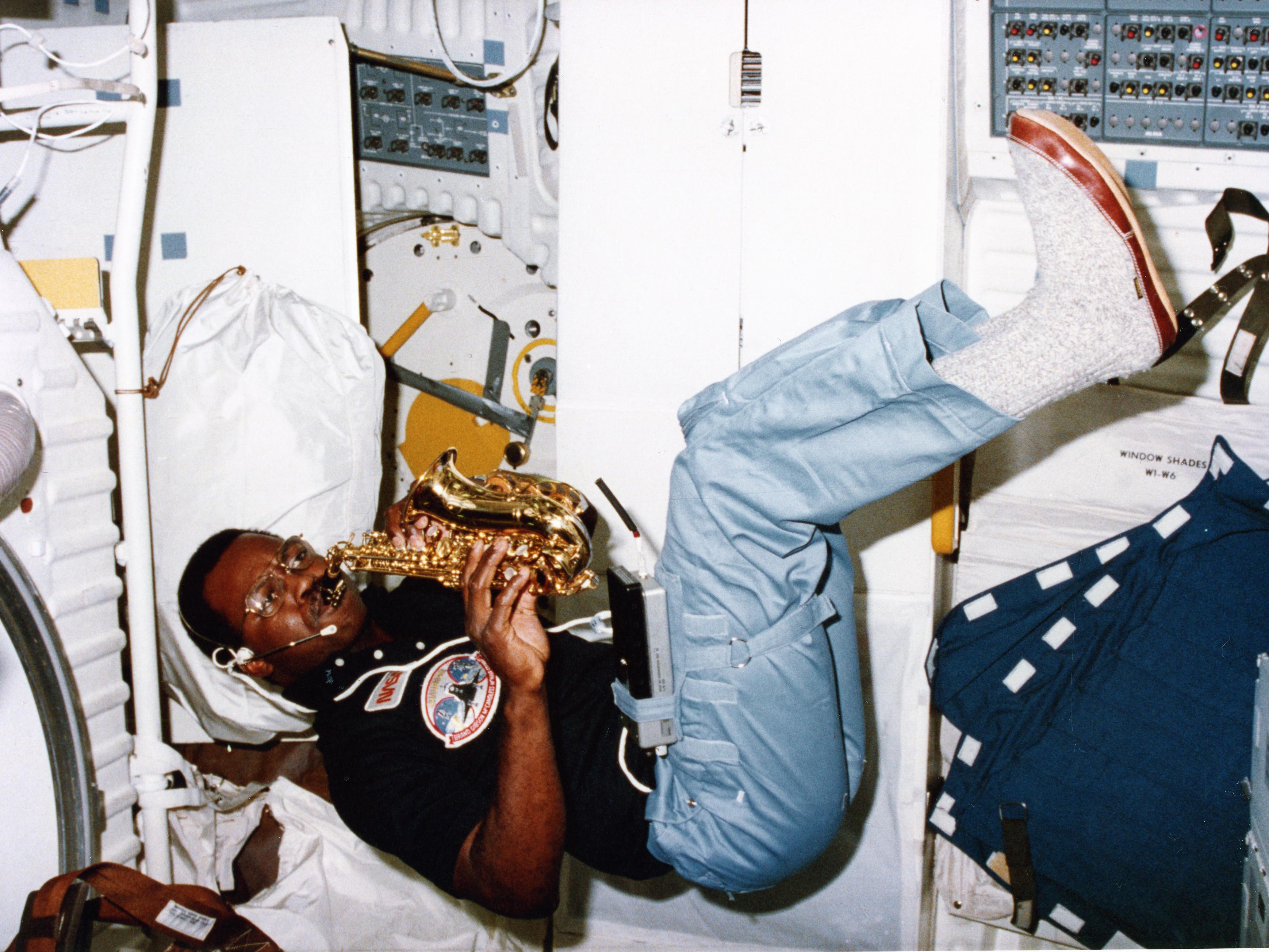 Dr. McNair was an accomplished saxophone player. He played saxophone for a band during college and continued his love for music throughout his life. He was photographed playing his sax during his first mission to space in 1984. (Read about his preparation from the music store owner.) During his second mission, he planned to play an original piece that would be heard from space. Sadly, that did not come to be.

Additionally, he was highly skilled in karate. He won the 1976 AAU Karate Gold Medal and five regional championships, eventually achieving the rank of fifth-degree black belt.

Tributes and His Legacy

In 2011, the Ronald E. McNair Life History Center opened as a museum that pays tribute to the life of Dr. McNair. Through moving photography and artifacts, the museum tells the story of Dr. McNair from his childhood to his death.  He is portrayed as a renowned physicist who was a pioneer in the field of lasers, as well as an accomplished saxophonist. He is remembered as a young child who showed a fascination with science and math and overcame the discrimination of the 1960s South to pursue those interests.

Many schools have been named or renamed after Ronald McNair.