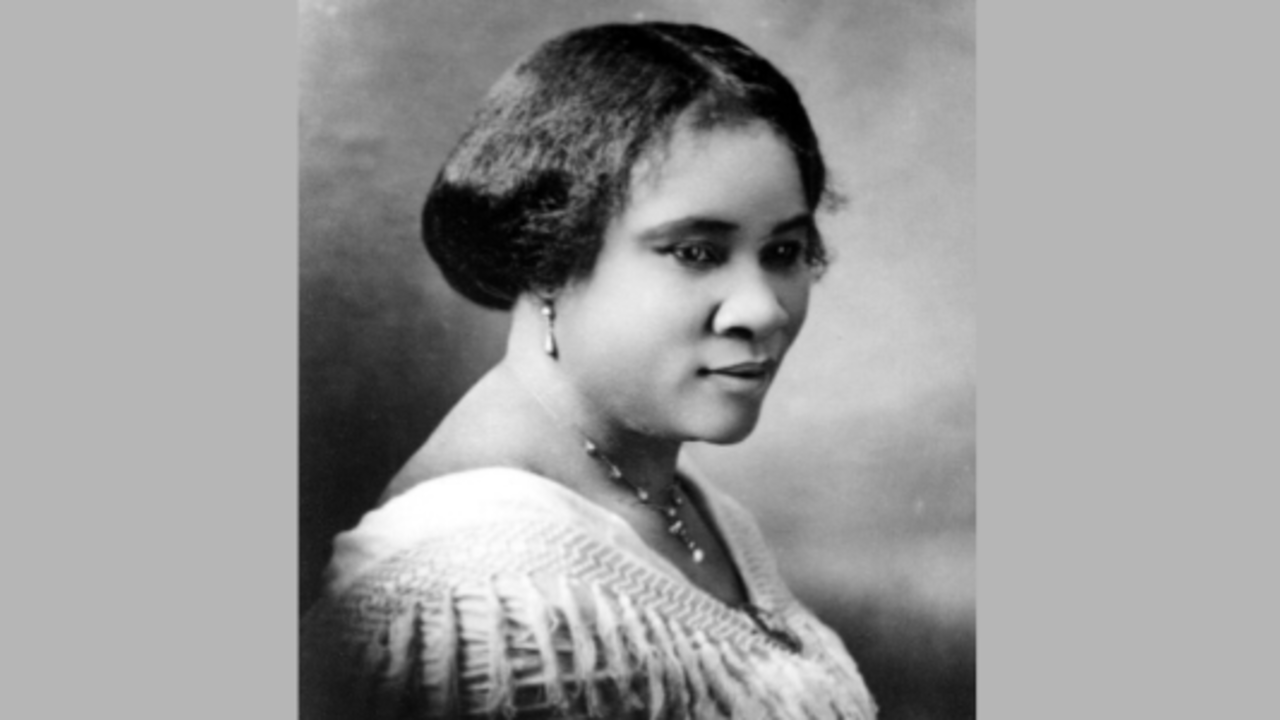 I'm celebrating Black History Month by looking for changemakers and trailblazers.
DAY 4- Madam C.J. Walker, born Sarah Breedlove in poverty-stricken Louisiana in 1867, went from picking cotton to become the first self-made American woman millionaire. But it was not a straight line.

“There is no royal flower-strewn path to success,” she once observed. “And if there is, I have not found it — for if I have accomplished anything in life it is because I have been willing to work hard.”

She married at age 14, gave birth to her only daughter in 1885, and two years later became a widow. Upon her husband’s death, she moved to St. Louis where her four brothers were barbers. She saved enough money working as a laundrywoman to educate her daughter.

During the 1890’s Sarah began to lose her hair due to a damaging scalp ailment. She was so embarrassed by her appearance that she began to experiment with scalp conditioners and healing formulas made by another black entrepreneur, Annie Malone. She soon became a sales agent for Annie and moved to Denver. There she met and married her second husband, Charles Joseph Walker, a newspaper sales agent and started her own company.

Founded on her testimony of success with regrowing her own hair and giving it that silky sheen that women craved, she put in motion a remarkable marketing campaign.

On the suggestion of her husband, Sarah changed her name to the more impressive-sounding Madam C.J. Walker, and founded her own business selling Madam Walker’s Wonderful Hair Grower, a scalp conditioning and healing formula. They capitalized on the advertising power of black newspapers and conducted an exhaustive door-to-door sales campaign throughout the South and Southeast. She took a course in public speaking so she could give persuasive presentations as she traveled the US giving lectures and demonstrations.

She used her confidence and boldness to get the attention of the black elitists who tried to ignore her. According to a 1998 Times magazine article,

She disrupted Booker T. Washington’s National Negro Business League Convention in 1912 by demanding to be heard. “Surely you are not going to shut the door in my face,” Walker shouted to Washington, who had ignored her for three days. “I have been trying to tell you what I am doing. I am a woman who came from the cotton fields of the South. I was promoted from there to the washtub. Then I was promoted to the cook kitchen. And from there I promoted myself into the business of manufacturing hair goods and preparations. I know how to grow hair as well as I know how to grow cotton. I have built my own factory on my own ground.” She got their attention.

She even opened a college in 1908 to train her “hair culturists.” Her corporation at one time employed over 3,000 employees.

“At a time when unskilled white workers earned about $11 a week, Walker’s agents were making $5 to $15 a day, pioneering a system of multilevel marketing that Walker and her associates perfected for the black market,” wrote Harvard professor Henry Louis Gates Jr. in a 1998 story for TIME. “More than any other single businessperson, Walker unveiled the vast economic potential of an African-American economy, even one stifled and suffocating under Jim Crow segregation.”

In fifteen years she amassed a fortune and is the first known African-American woman to become a self-made millionaire.

Pictured is Villa Lewaro, the mansion of Madam C.J. Walker built in 1916.

Continuing to push through racist and sexist barriers in her climb to success, Madam Walker had a mansion built in 1916 at Irvington-on-Hudson, N.Y., designed by the first registered black architect and near the estates of Jay Gould and John D. Rockefeller. In spite of changing hands a few times after her death and that of her daughter, even her mansion maintains the dignity Walker set in motion when in May 2014 it was added to the National Register of Historic Places. She died at age 52 in 1919, but her legacy continues to inspire us and remind us that the secret to success is no secret at all. As she once explained, “I got my start by giving myself a start.”

How her legacy goes on

Madam C.J. Walker began her rise to fame over 100 years ago before women could vote. Her influence continues. A new haircare collection has launched honoring her legacy, there are several children’s books about her life, and coming soon is a Netflix Original, “Honoring the Life of Madam C J Walker,” starring Octavia Spencer. The movie is based on the biography, “On Her Own Ground,” written by her great-great-granddaughter, A’lelia Bundles, an award-winning journalist and author, founder of the Madam Walker Family Archives, a Columbia University trustee and immediate past chairman of the National Archives Foundation.

I’ve always had a special interest in Madam C.J. Walker because my mother was a successful beauty shop owner throughout my childhood in St. Louis, Missouri who used Walker’s products and spoke of her with pride and reverence.

Walker’s legacy goes far beyond beauty and haircare products. During a time when Jim Crow segregation and rampant racism were legal barriers to the education and success of African Americans, she trained and empowered thousands of women (reportedly 20,000 “agents” in the USA and the Caribbean) to become financially independent and self-confident, she donated to causes such as building a black YMCA in Indianapolis and restoring Frederick Douglass’ home in Washington, and she spoke out to lead protests against issues such as lynching. Best of all, she showed us what hard work, determination, sharing your knowledge, and philanthropy can do.

This article is an update of the original version published in 2010 on my ColorYourLifeHappy blog. Following that original post, I received the following comment from Walker’s biographer and great-great-granddaughter, A’Lelia Bundles:

Thanks so much for featuring Madam C. J. Walker on your blog and for sharing information about her with your readers. I hope your readers will have a chance to visit our website at http://www.madamcjwalker.com

If you are encouraged by this story to be a changemaker or trailblazer, tell us about it in my Facebook group, Your Life Story Matters
Close